Get fresh music recommendations delivered to your inbox every Friday.
We've updated our Terms of Use. You can review the changes here.

by The Lancashire Hustlers 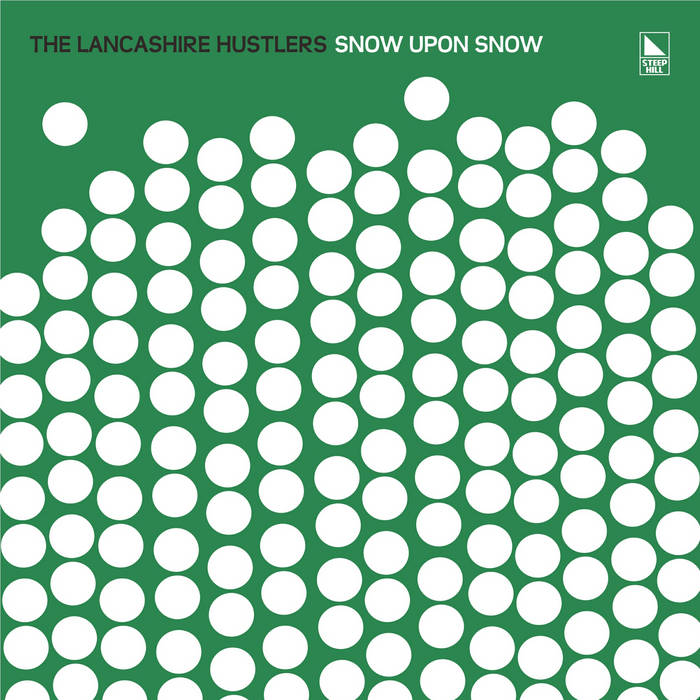 JTB I love their minor key sound - especially the vocals!

"Gutted that we missed the strictly limited lathe cut of this put out by the Do It Thissen folk through the bands own Sleep Hill imprint, I wouldn’t say it’s ruined our Christmas but let’s just say since finding out they’ve all gone that the once well-stocked and cheery Yuletide tree doesn’t look so twinkly now. Anyway, there’s been a little debate raging around here as we were going to say of this, that those of you fancying your seasonal sounds somewhat dashed in withdrawn head bowed melancholia might be minded to seek out the Lancashire Hustlers’ Christmas bruiser ‘snow upon snow’. However, the Thissen people look upon this as being slightly upbeat, all of which had us instantly putting it on loop play to see if there was anything we’d missed. ‘Fraid not, I guess the message here is the invisible and the disappearing, snowy metaphors covering the shame of society and, moreover, the solitude of the lonely, the lost and the forgotten. Now, we are getting a little light on merriment here aren’t we, but joking aside, the bruised wounding of this cuts deep, its not for everyone the happiest season of the year for Christmas haunts like no other time. It’s not that ‘Snow Upon Snow’ is a downer, far from it, beautifully crafted with a strangely radiant and snaking motif, itself exuding a curious fuzzily glowed homeliness, yet scratch away at the surface and there’s a pause to step back from the race for a chance to see out of the consumerist box. If you must, the years ‘Fairytale of New York’."

"The Lancashire Hustlers offer up two seasonal songs on their Christmas single, another lathe cut in an edition of only 10 copies, that were sold out within an hour of getting on sale. Much faster than the band themselves had expected. The Lancashire Hustlers are Brent Thorley and Ian Pakes, originally from Southport, in the North-West of England, and making music together since they were teenagers. So far, the two released four albums, the last one being 2018's 'Stuck In A Daydream'. Brent and Ian are influenced by a wide array of genres, including soul, psych pop, folk rock, film soundtracks and even old musicals. The duo consider their albums 'pop operas'. Pop, of the sophisticated sort, is what comes to mind listening to their Christmas single. Brent and Ian are both multi-instrumentalists and on the Christmas single, a wide range of instruments are used: guitar, bass, piano, drum machine, Casio Casiotone (Brent) and sleigh bells, other percussion, glockenspiel and wind (Ian). The Casiotone and the drum machine set the atmosphere for the dreamy shimmering A-side, ’Snow Upon Snow’, a poetic reflection of snow falling down and then melting away. More a winter song, than a Christmas song, but the B-side is a Christmas song for sure, as much as it is a political statement – or, it is? ’Vote For Santa Claus’ – ‘if we would join our hands behind the man in the red, there could be good times ahead’. So true, especially if you compare this jolly good natured ‘ho ho ho’-ing big elf with some of our current world ‘leaders’. Here, it is the glockenspiel that sets the atmosphere of the song."

Bandcamp Daily  your guide to the world of Bandcamp

Kyle McNeill joins the show to talk about his new project, Phantom Spell