by The Lancashire Hustlers 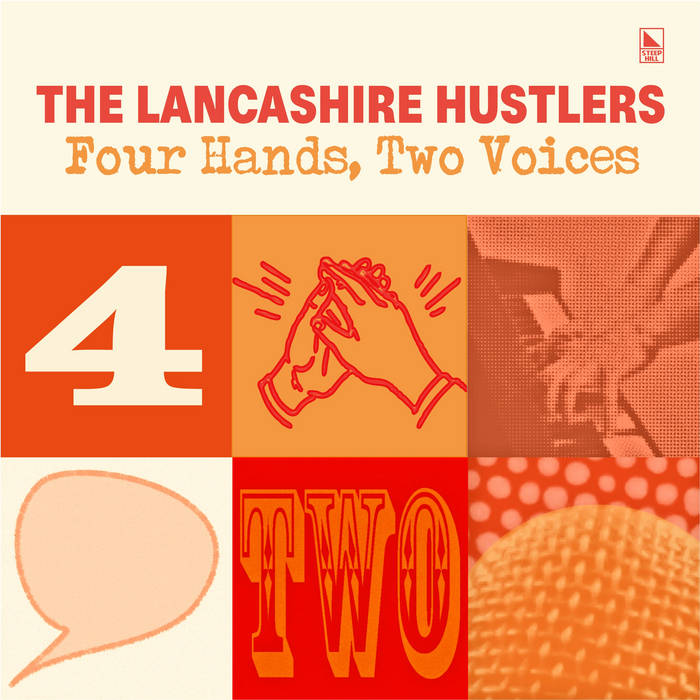 'Four Hands, Two Voices' is the fifth album by The Lancashire Hustlers.

"Shindig! and 6 Music's Mark Radcliffe have been the Hustlers' most ardent supporters, but really, the delightful pop concoctions of this immensely talented and playful pop duo should be adored by anyone au fait with Steely Dan and Robert Wyatt.
Brent Thorley and Ian Pakes spread their wings on their fifth effort, Four Hands, Two Voices, with the focus this time around on a mellow tonescape that takes in funky, folkish tunes and stage-ish melodies with a soulful bossa edge that has all the hallmarks of a lost classic from 1970-71. If not resolutely like Caetono Veloso's London-recorded self-titled gem or Will Malone's debut, there's something about these songs that evoke that autumnal feeling through their array of predominantly acoustic instruments and dreamy air. From the single 'Mindcrawl', which we called “stupendous”, to the soft-rock swagger of 'Top Gun (In Retirement)', the plaintive 'The Flowers and The Reservoirs' and filmic 'Letters I Should've Written', it's another enticing affair." ★ ★ ★ ★
Jon 'Mojo' Mills, Shindig! Magazine


"Musically combining the shared harmony of Turin Brakes with the idiosyncratic romantic psych pop of bands such as The Left Banke, they often stirrup a smorgasbord of congruous bands and artists. 'Four Hands, Two Voices' is no exception, with surprise shades of Marvin Gaye and Curtis Mayfield on the pastoral soul opener ‘Top Gun (In Retirement)’, and a kind of Anthony Newly starring musical meets XTC on the more theatrical ‘Stuck In The Middle Of A Week’. Elsewhere amongst a repeating musical leitmotif of quasi-swami atmospheres (brassy resonating faux-sitar and finger-cymbal trinket charms), you will find dalliances with Bacharach (sharing a stage with George Harrison) on the lilting romantic waltz whimsy ‘It’s Too Early’, the voice of Glenn Tilbrook on the beautifully pining rained-off ‘The Flowers And The Reservoirs’, and Badfinger harmonising with Dylan on the quivery, dreamy malady ‘Letters I Should’ve Written’.
Disarming what is a touching but poignant selection of both melancholy and lamentable reflection, the duo’s loving and comfortable, even smooth musical sheen makes the sadness and yearning parts more palatable.
Whether venturing into the mind to connect with an object of desire or sailing across the subconscious on an adventurous voyage into psychoanalysis, these northern hustlers are guaranteed to make the journey a most harmonious one. The duo’s fifth album is another lovely songbook of maverick encounters, pastoral soul and soft bulletins".
Dominic Valvona, Monolith Cocktail

Bandcamp Daily  your guide to the world of Bandcamp